It is now fall and the mountainside is emblazoned with the stunning deep red of the leaves lit up in the evening sun. Just before the onset of winter, it is a uniquely Japanese fall custom to witness the beautiful changing foliage while warming up in a historic hot spring. Tochigi Prefecture is dotted with hot springs and stunning scenic views, making it a popular spot for tourists. But the area is also home to the more unconventional: here we are present some of Tochigi’s yokai. Add these spots to your itinerary for an interesting twist to your travels! 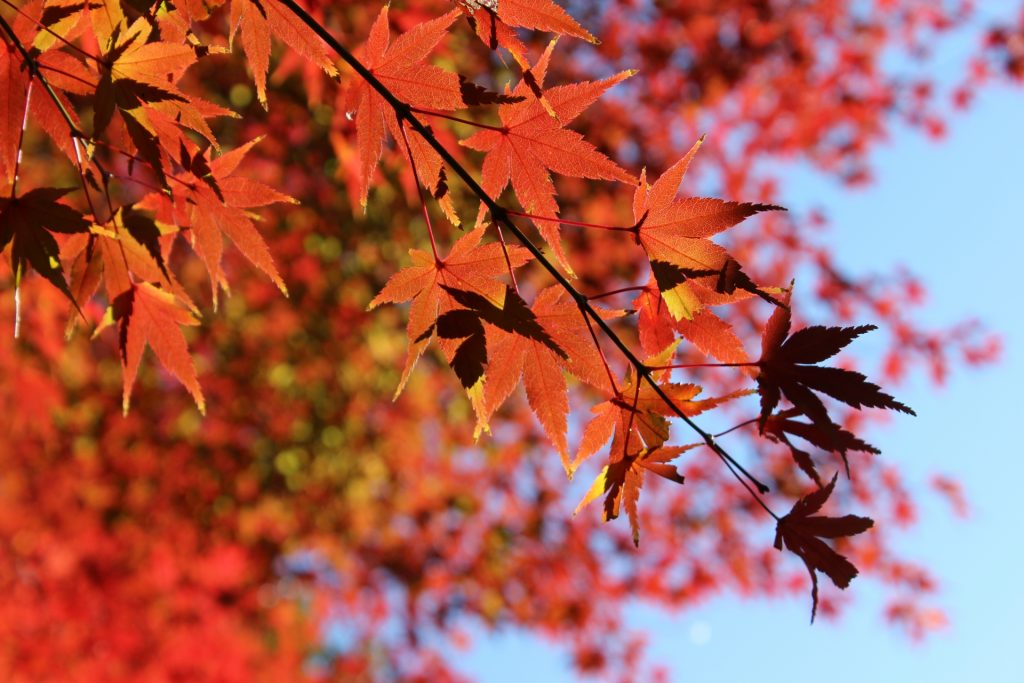 Raiju, Creature That Descends from the Sky

Did you know that the area around Utsunomiya City, famous for its gyoza dumplings, gets the most thunder and lighting of anywhere in Japan? In fact, another name for the city is Raito or “city of thunder.” From early summer to early fall, the sound of thunder is so loud every evening that it can seem as if the sky will open up.

Tochigi Prefecture and Ibaraki Prefecture are said to be the abode*1 of the raiju (thunder beast). Raijin (thunder god), meanwhile, is responsible for making the thunder. He is recognizable for his red body, a tiger skin wrapped around his waist, and drums carried on his back.

Raiju looks like a rat. His body is larger than that of a weasel, with sharp claws and a forked tail. He ordinarily lives in a hole he digs somewhere in the mountains, but when he sees thunder clouds, he quickly mounts them. Sounding a deafening cry, he turns into lightning, wreaking havoc where he comes crashing down.

Trees felled by lightning are said to have raiju’s claw marks on them. In Utsunomiya, the shape of lighting striking is often clearly visible, so try to catch a glimpse of the beast’s shadow…anticipating the thunder and lightning could make your trip even more fun!

The Nine-tailed Fox Morphs into the Sessho Seki

After eating your fill of Utsunomiya gyoza dumplings, go north a little bit. At Nasu-Yumoto, you’ll find a famous spring called “Shika-no-Yu” or “deer spring.” This place was so named when a local hunter came upon an injured deer recovering in the spring waters. The color of the water is a subtle opaque blue-green (sulfur spring) said to have medicinal properties especially effective for healing cuts and bruises. Many people visit the spring from both inside and outside the prefecture to take in the historic atmosphere and forget about time in its healing waters.

In a park nearby the Shika-no-Yu can be found the Sessho Seki, which haiku poet Matsuo Basho (1644–1964) went to see. As the name suggests, the stone instilled fear in people around the nation, as it is said to kill anything that goes near it.

Proceed along Sai-no-Kawara (Children’s Limbo)*2, following the smell of sulfur. The Sessho Seki, sealed with a sacred rope to keep it from doing harm, is enshrined on the far hill face. Even so, the grass doesn’t grow around the stone though the mountain is entirely green, and piles of dead butterflies*3 and the like are found all around…

According to local folklore, the true identity of the stone is in fact the nine-tailed fox. The fox had once shape-shifted into a beautiful woman named Tamamo no Mae to trick the emperor. When she was discovered by a onmyoji (yin yang master), the fox made her escape from Kyoto to faraway Nasu-Yumoto and, though defeated, she morphed into a large stone. Holding a grudge, the rock continues to emit poison, killing all living things that approach it. Be careful not to get too close, and don’t stay for too long!*5

In addition to the above, Tochigi is home to many other legends, including that of the Kegon Fall, where a dragon is said to live, the Nagaoka Hyakuana Tomb where a domeki (hundred-eyed demon) is said to appear, and more. If you are traveling to Nikko or Nasu, be sure to take in some yokai spots as you enjoy the fall foliage and hot springs. It will add a whole new dimension to your trip!

[Footnotes]
*1 In Takehara Shunsen’s Ehon Hyakumonogatari, the raiju is said to abide in the Tsukuba area of Ibaraki Prefecture and the Mt. Nikko area of Tochigi Prefecture. However, according to the Folktale of Strange Phenomena and Yokai Database at the International Research Center for Japanese Studies, there are stories describing sightings of the creature around the nation.
*2 The riverbed just before the Sanzu-no-kawa (“River of the Three Hells”)
*3 From notes taken by Matsuo Basho: “The rock’s poison has not diminished, and the area around it is so littered with dead insects that one cannot see the ground.”
*4 The legend of the nine-tailed fox is said to have arrived in Japan from Tang Dynasty China around the 8th century.
*5 Limit the amount of time you walk around the Sessho Seki due to the high level of hydrogen sulfide emitted.

We are accepting applications for writing tourism and cultural articles in Japanese and/or English, multilingual translations and other services. For inquiries, please contact us:
Tel: (+81) 3-6902-9030
Email: info@omega-com.co.jp

Note: Unauthorized copying and replication of the contents of this site, text and images are strictly prohibited. All Rights Reserved.